SOHO provides easy and flexible access to a fully equipped workplace for freelancers, entrepreneurs and professionals from the creative sector. Renting a desk, an office or an event space also comes with value-added business services and opportunities for professional development, cultural enrichment and relaxation – all happening “at home”. All of the practical necessities of office life are also provided without the mundane time drain of you having to worry about them yourself.

SOHO’s "co-inhabitants" form a community of like-minded professionals, which stimulates creative exchange among them. 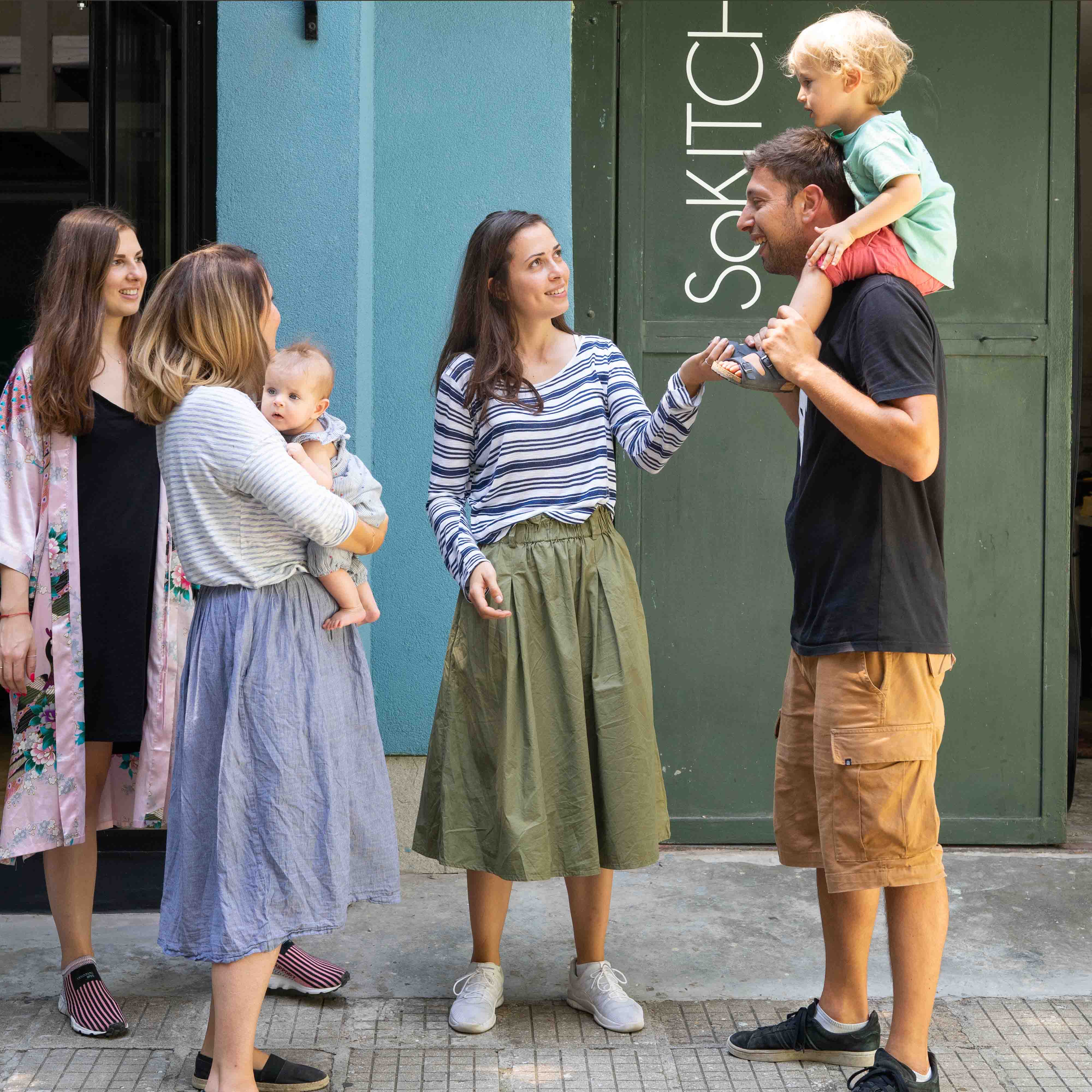 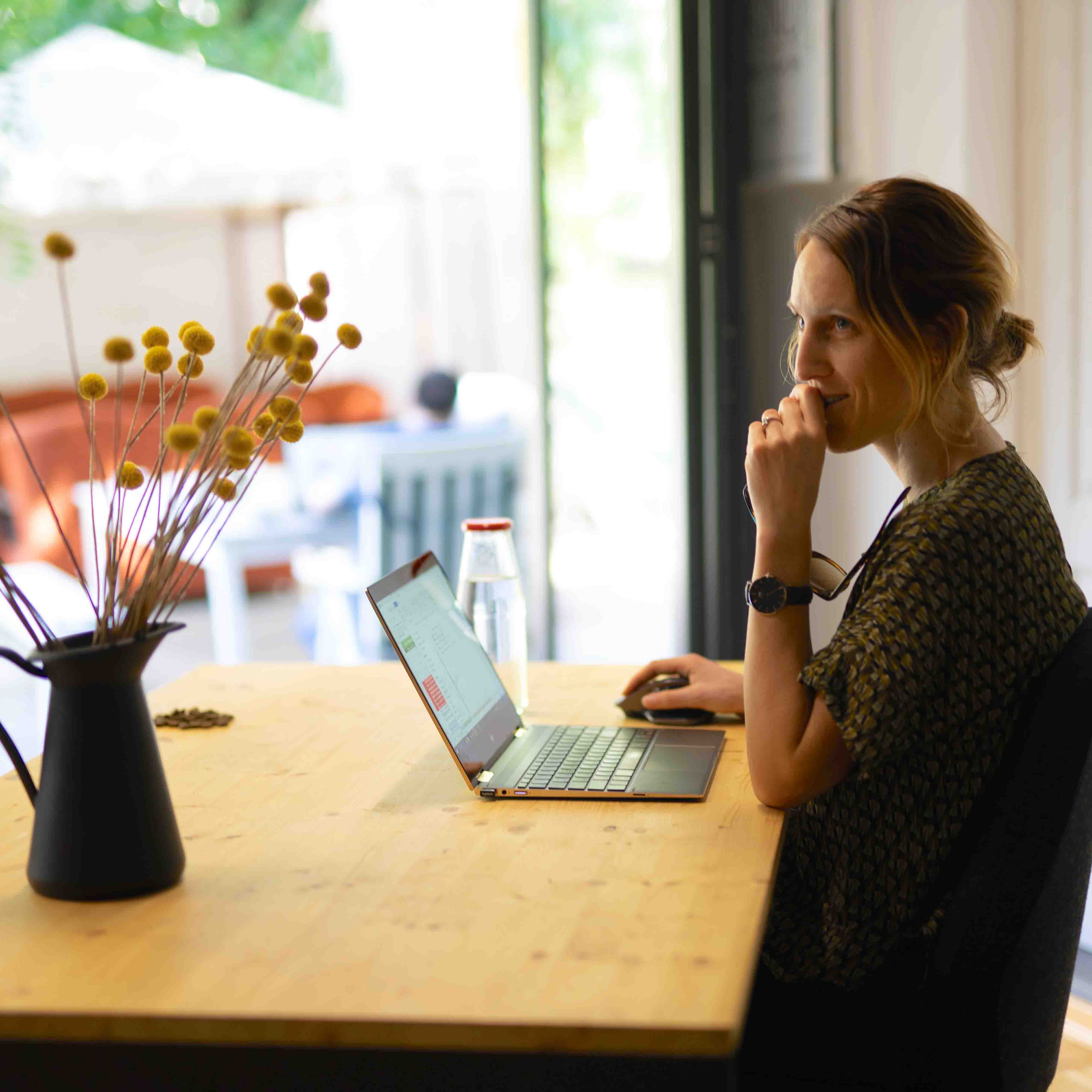 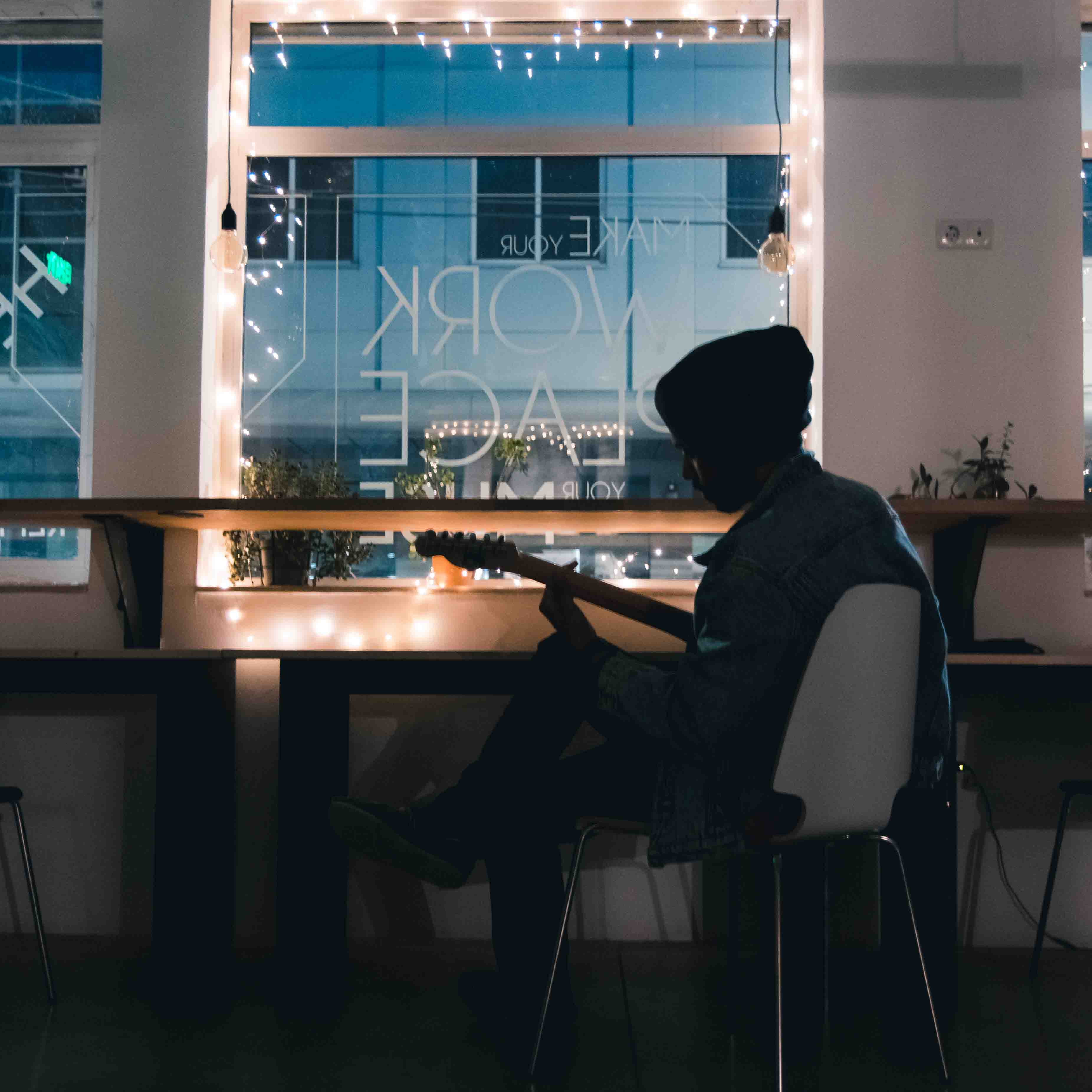 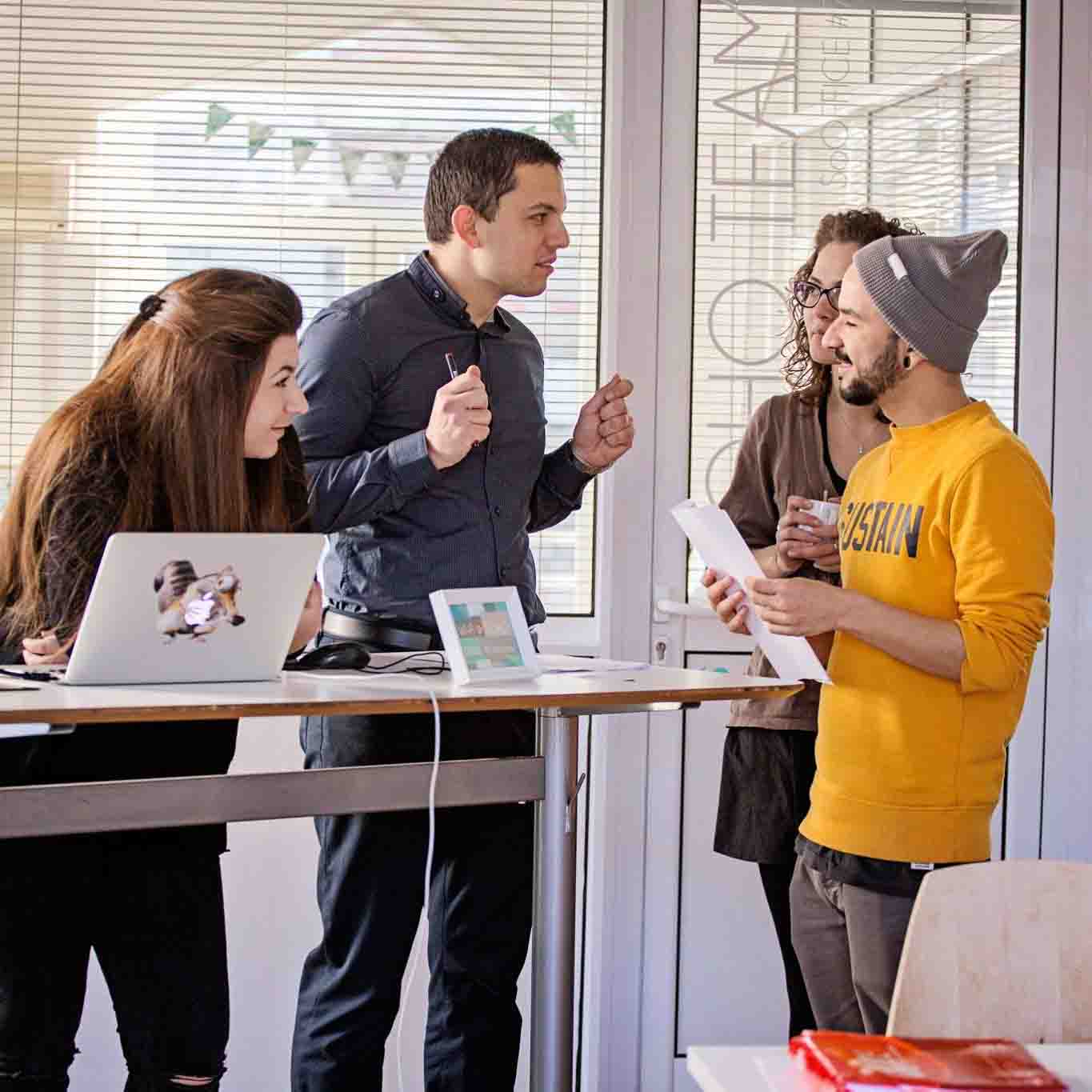 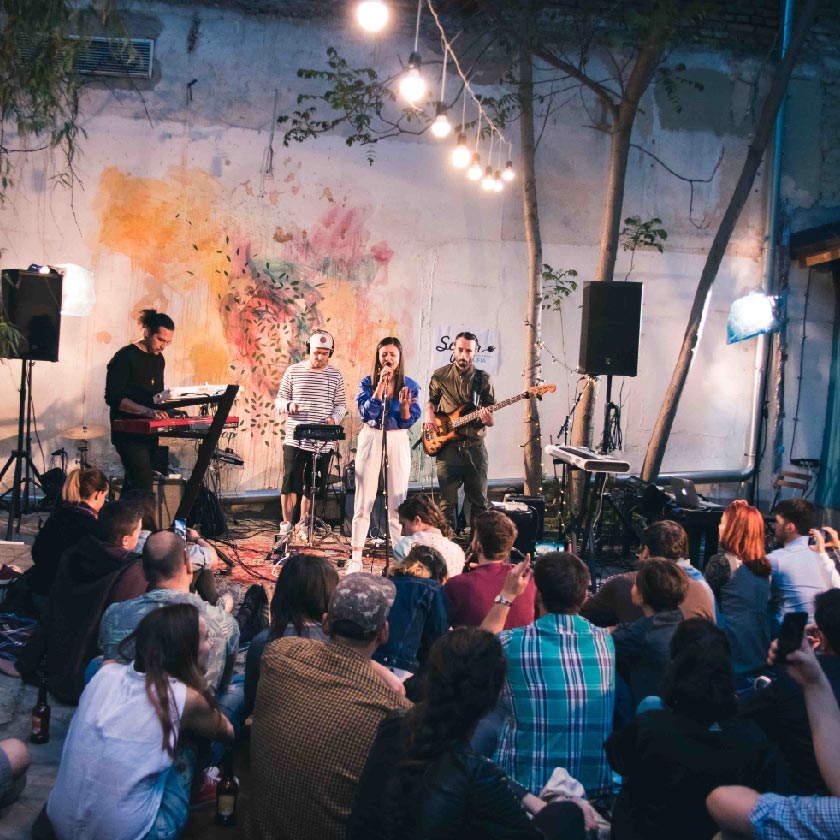 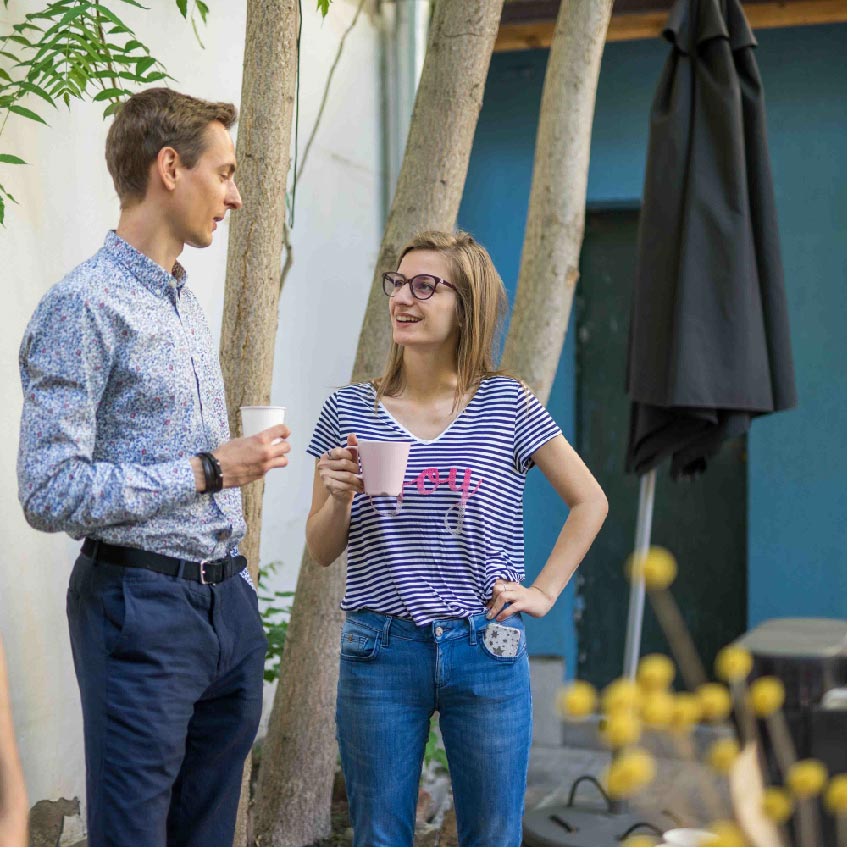 // Flexible workplaces for individuals and teams

All workplaces include a secured high-speed fiber optic internet connection, access to conference rooms, AC, a fully-equipped kitchenette, a scanner & printer, a shared library, tea, coffee, mineral water, cleaning and utilities. All prices are in BGN and are VAT inclusive.

A flexible desk – if you get bored with your old desk you can use a different one every time you come to work
including new deskmates.

A dedicated desk with an adjustable office chair and a cactus.

A personal space with plenty of natural light, comfortable furniture and lots of cacti, suitable for up to 4.

// Multifunctional spaces for up to 100 people. Can be rented 24 hours, 365 days a year. Prices are per hour and VAT inclusive.

Each and every one of the six spaces has:

and many more extras can be added. 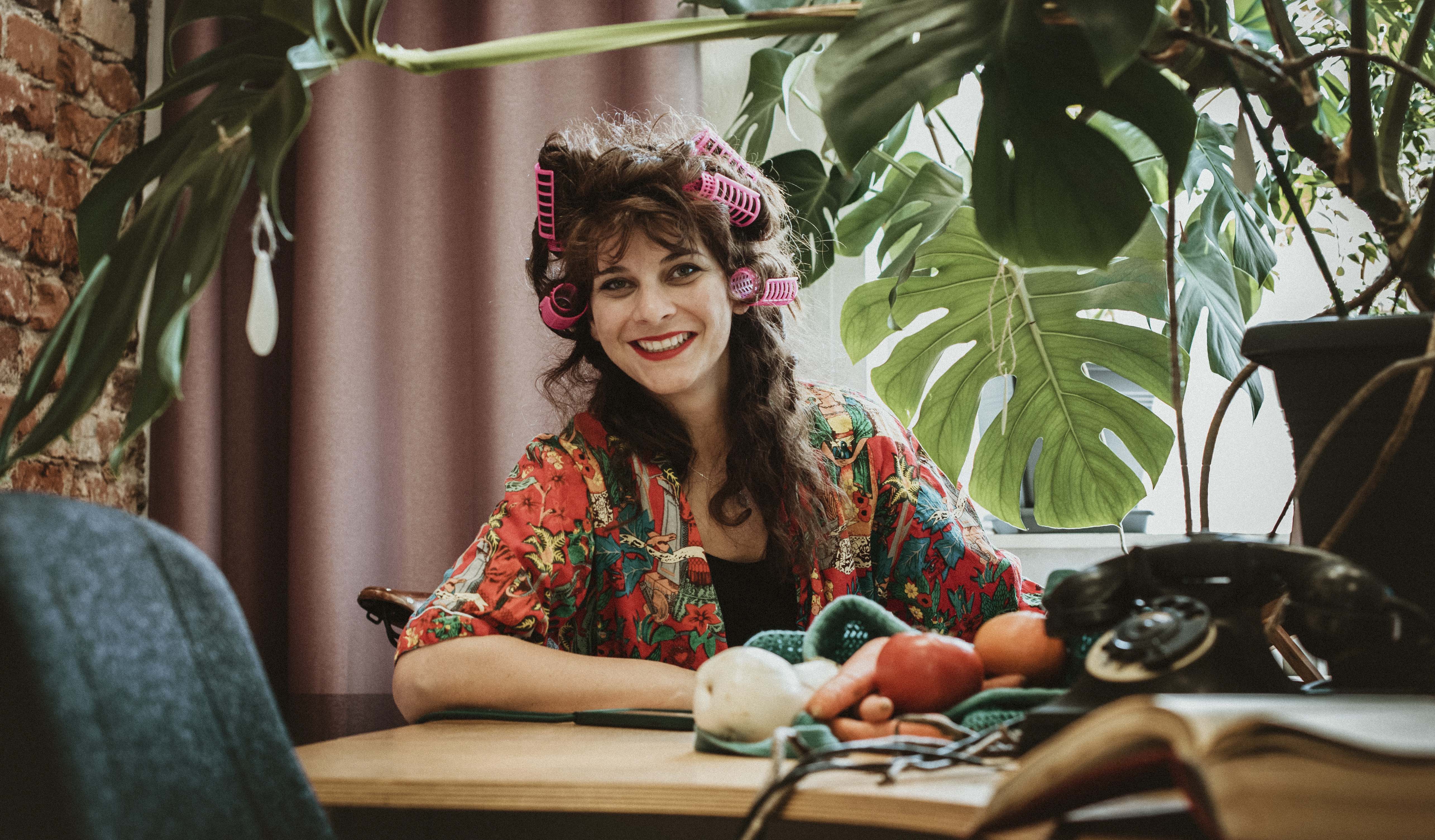 We are looking for a like-minded person to take a central position in our team - Community Manager with key priorities: ensuring the smooth functioning of the workspace, management and logistics of external events and generating ideas and implementing them for internal ones to maintain our community. A work experience is needed to show that she is a naturally hard-working, curious and extrovert person who is interested in the creative industry, culture and the improvement of the world around us. And because "People can only care about the things they know about." we will expect you to show it in a cover letter and CV to luba@soho.bg. 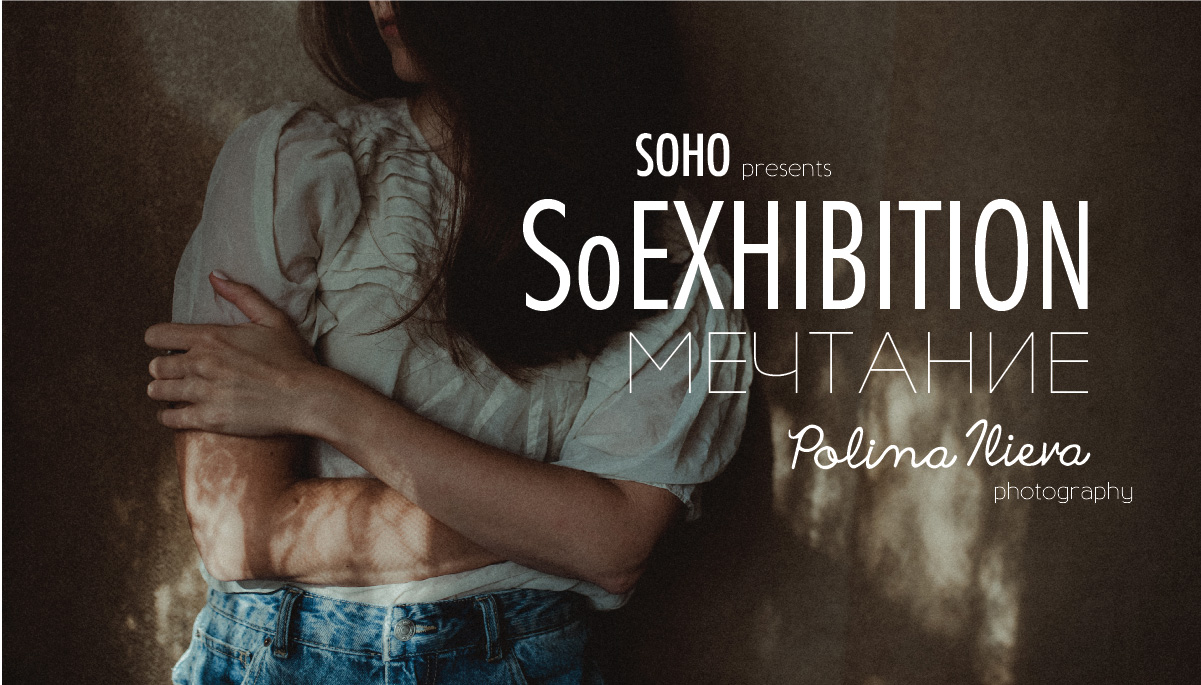 After more than 5 years of dreaminess for this moment, we present to you the first complete indepedent exhibition of Polina Ilieva - Dreaminess. A dreaminess seen through the essence and emotional journey of the woman-muse. The exhibition is inspired by women Polly meets at different times in her life. Women who impress her with their radiance, character, charisma and intellect, and whose portraits definitely do not leave us indifferent. 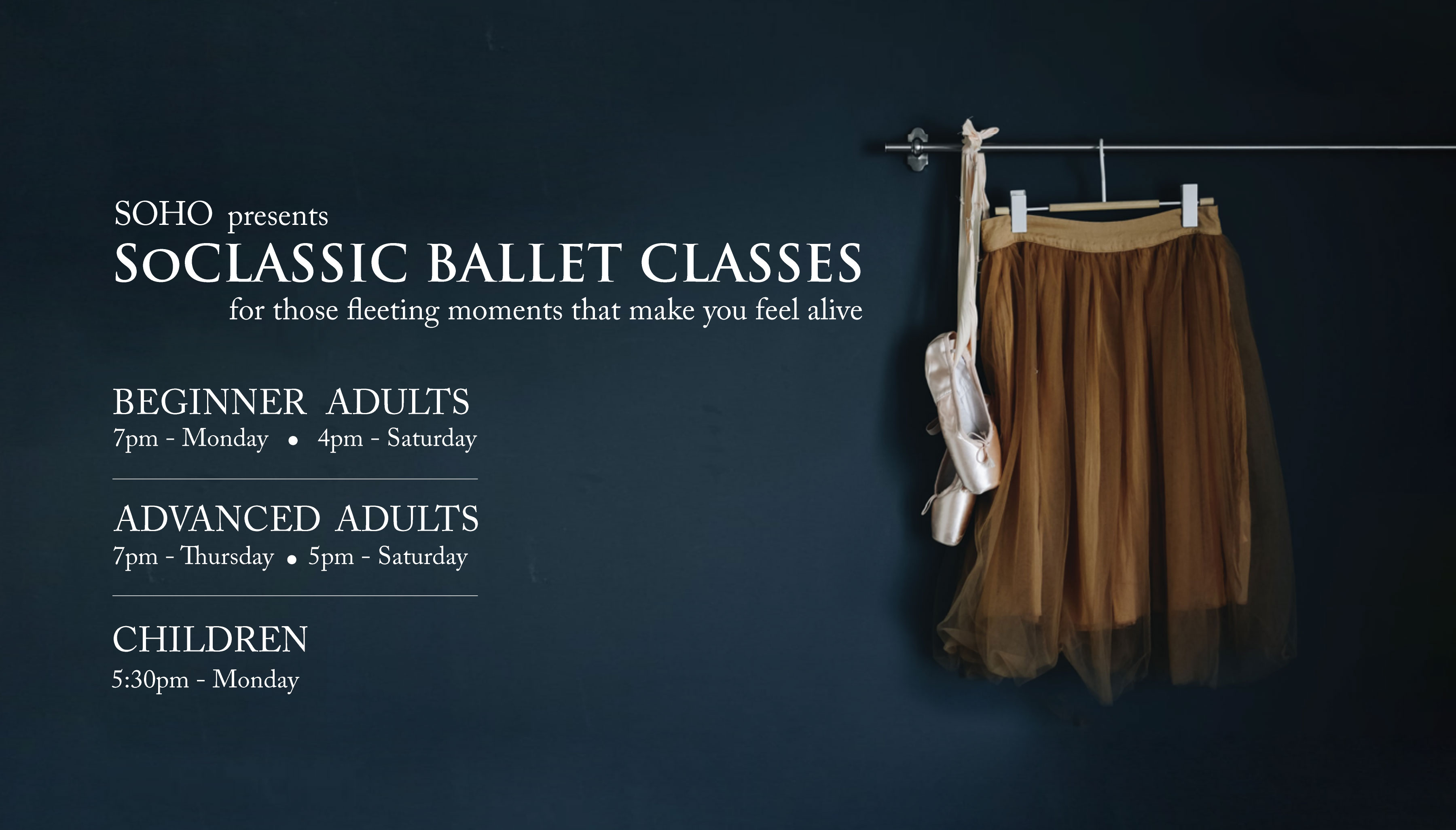 Every Monday, Thursday and Saturday

The course, taught by Daniela Vlad. Hristova, introduces you to the fundamentals of classical ballet and to the world of fine dance expression.“Through the necessity of ballet dancing a person finds the freedom of movement."


The course, taught by Daniela Vlad. Hristova, introduces you to the fundamentals of classical ballet and the world of fine dance expression.

“Through the necessity of ballet dancing a person finds the freedom of movement. The point is to understand that we have a potential to dance and that our abilities are encoded in us and the only thing we should do is finding them. This is not easy because the technique of classical dance is difficult. Therefore, persistency, perseverance and most of all, desire, are required.”- says Daniela.

We connect the name of Daniela Hristova with the show “Radio ballet” broadcasted on Radio FM+ - first of its kind in Bulgaria. She is founder of the ballet studio “Sun” – part of community centre “Anton Strashimirov” and she has been a ballet pedagogic, choreographer and critic for the past 20 years. She has been writing articles for various newspapers and magazines as “Standard”, “Dance”, “Word”, “The other audience”, “One world”. She was host on the 16th International ballet contest which has been organised in Varna since 1964.


We are looking for a like-minded person to take a central position in our team - Community Manager with key priorities: ensuring the smooth functioning of the workspace, management and logistics of external events and generating ideas and implementing them for internal ones to maintain our community. A work experience is needed to show that she is a naturally hard-working, curious and extrovert person who is interested in the creative industry, culture and the improvement of the world around us. And because "People can only care about the things they know about." we will expect you to show it in a cover letter and CV to luba@soho.bg.

The main benefits are the contact with meaningful people from all over the world, diverse, creative and socially significant work, access to a rich program of interesting events - whether as a host and / or guest, development of relevant personal interests and talents and acquisition of new diverse skills broadly applicable in life. The working hours are from 9 am to 6 pm with a net salary of BGN 1,500. You can find more information on our website and social networks, as well as in numerous articles from independent sources related to the Green House. 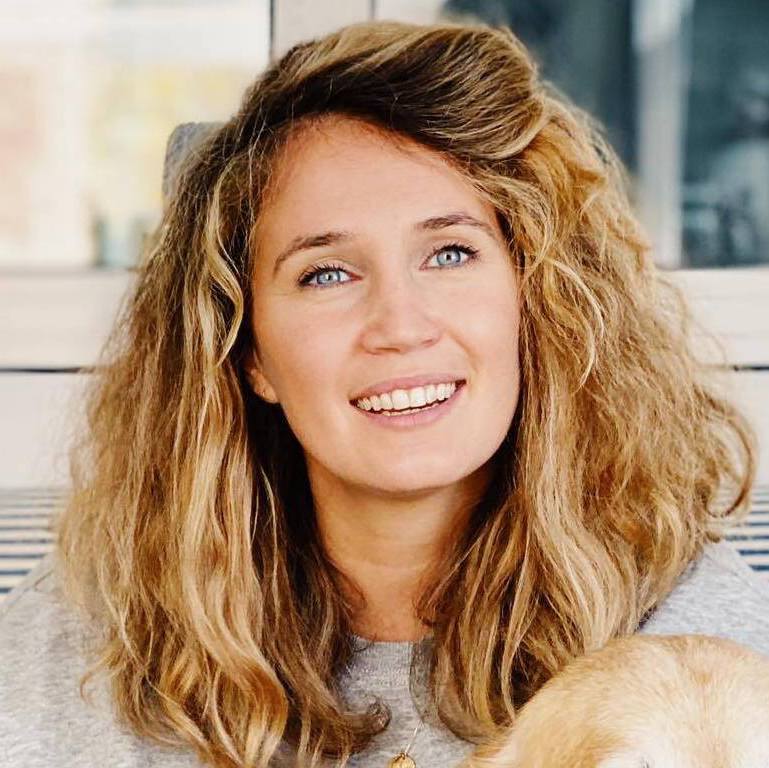 After a decade of living in Paris amid which the Sorbonne, interaction with exceptional people, attending extraordinary events, and journeys across Europe, Luba created SOHO out of her inner need to bring together at least a part of her incredibly diverse interests and dreams. This is also her function – to keep on generating and accomplishing them. Lately, she can’t be found in the green house as often, but rather in the blue one (in Sinemorets), however you can always recognise her by the messy hair, her just as messy-haired children, and the golden retrievers lingering around her. Beside them, Joro, and the two SOHO houses, she adores interior design, soaring across virgin mountain slopes on a snowboard, practicing yoga, or simply being surrounded by nature. If you have any idea concerning the spirit of SOHO – whether it's art, a professional or a social cause, she is the person to share and further develop it with. And if you are wondering who is behind the ideological vision of SOHO and the graphic and interior design, just because you like it – then she will be very happy to hear it, since it’s her work. 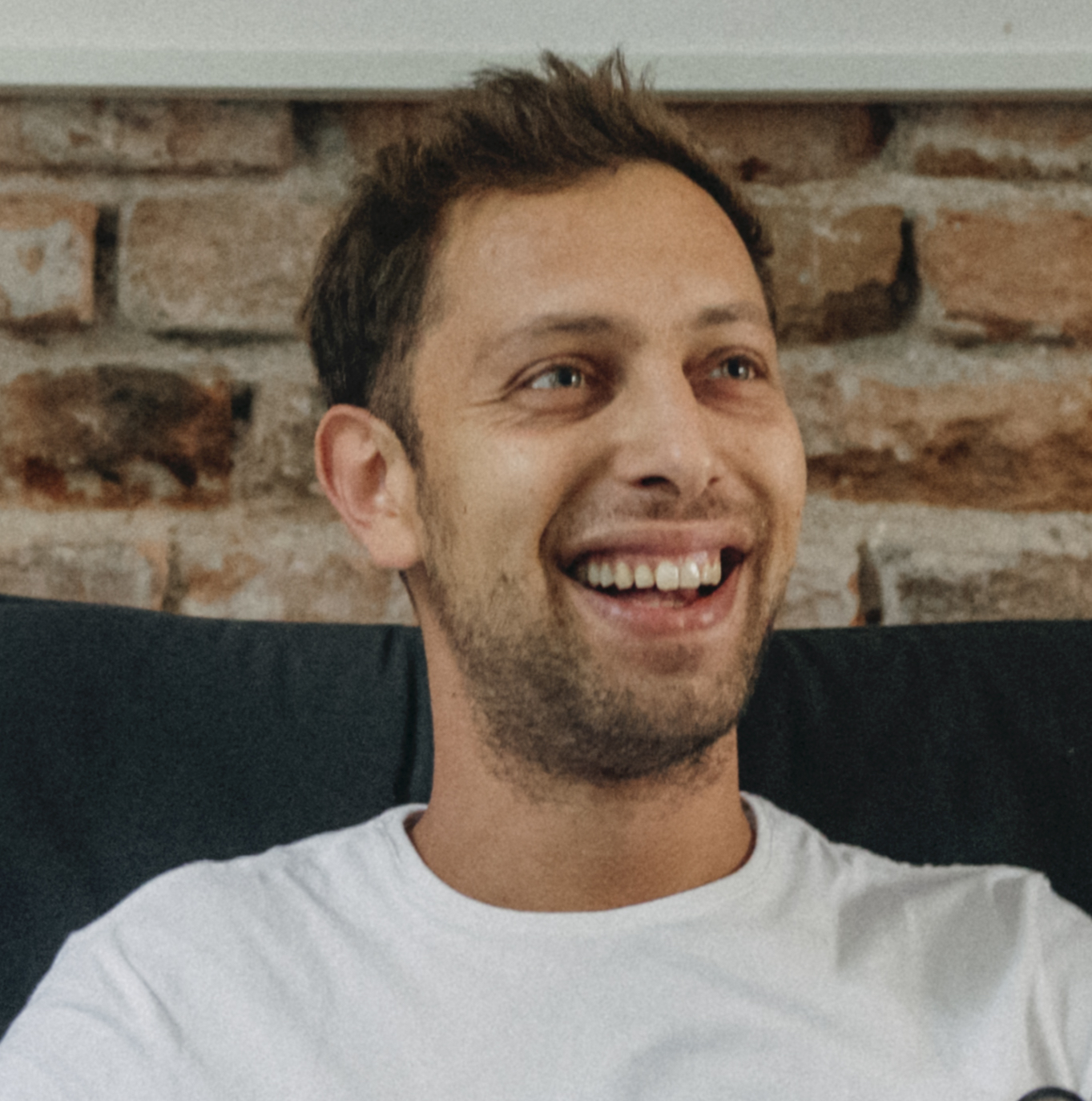 A year and a half following the beginning of the green adventure, thanks to Joro, SOHO found its center of gravity by becoming “professionalized” while preserving its initial vibe. With a formal education in administration and an informal one as a DJ and an organiser of music festivals, Joro naturally took up the position of CEO, later becoming a partner in the green house, then in the blue one, and eventually – in the one with Max and Faye. Apart from the administrative, organisational, technical and musical issues, Joro is your man if you need something that you can’t find on our page. In addition to SOHO's usual services, he’s the guy to talk to if you have anything in mind, such as developing the alternative musical scene in Bulgaria, having light drinks of craft beers in one of our gardens, a squash contest (don’t get upset when he beats you), parties with quality music and good company (often organised by him or his close friends) and even things that neither he, nor you have still thought of. 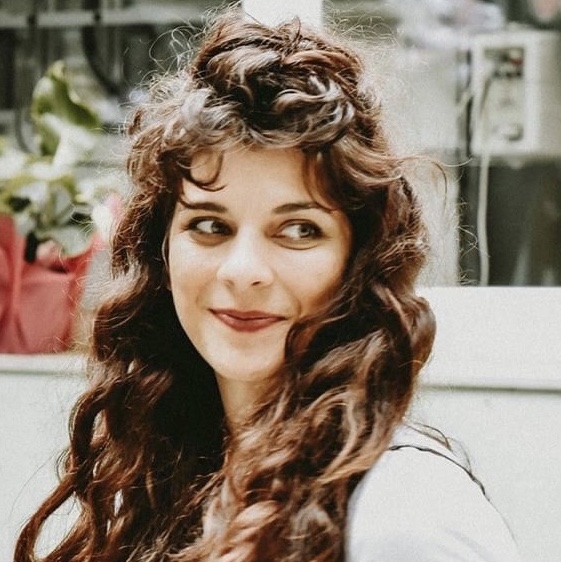 In complete contrast with her figure, her nickname is “SOHO’s BIG mama”. She is your friendly connection to the green house, so if you need a workplace or to plan an event, she is the person. If you’re already an inhabitant of ours, and you need just about anything, again she is the one to help you. She wears mainly black, yet she is one of the most colorful people we know. For instance her hands are green, just like SOHO has always been, but ever since she came it’s become almost like a jungle. And if you mess with one of her plants she’ll straight up scold you. She’s extremely funny. And quite weird. But she’s our kind of weird. She’s so different from all the others, that getting bored would be the last thing to happen when you’re around her. Alongside her beautiful mind, her graceful hands create such amazing decorations for a myriad of occasions, that even Tim Burton would make her his scenographer. Like all the others she started out as an intern, but from the very first day (when she blew us away with at least 100 questions to which we could only reply with “well... by intuition” and “yes, you’re right we can improve that”) it became apparent she was of highest rank. Her interests vary from cinema and all other arts to culinary, having drinks (and no, we’re not talking about non-alcoholic ones), and adventures. Of course you can share all these activities with her (and us!). She is a walking beaming bohemian coziness which we share with every one of the inhabitants of our beloved house. 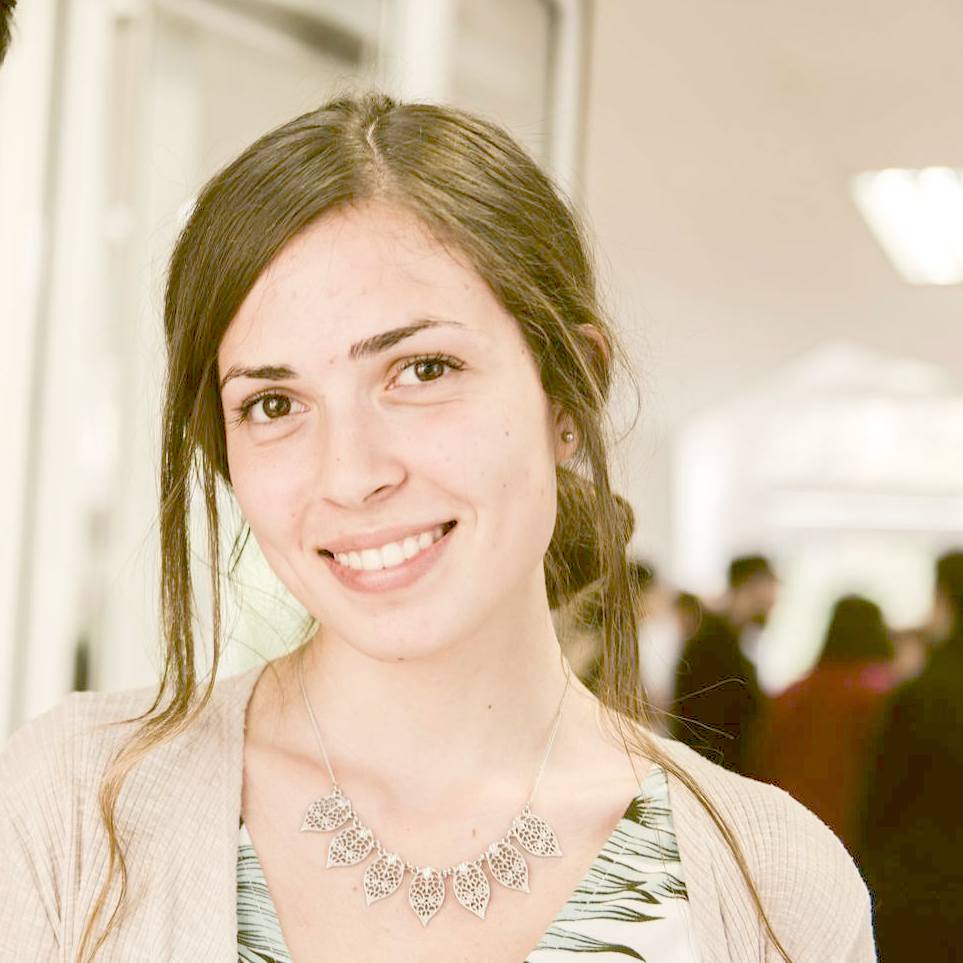 She stumbled upon SOHO “by mistake”, having thought that our vacant dedicated desk ad was a job offer, but there was something so distinct and magnetic about her that we didn’t mention her confusion. She initially started out as an intern, and even from the very first day it felt as if she had always been a part of us. She quickly grew to become community manager and your smiling connection to the green house. After 3-4 years she said she was leaving and with gratitude (not for the “abandonment”, but for everything prior) we sent her to Paris for a week. When she came back, though, she never stopped helping us, so we “formalized” our working relationship once again as she changed her title to Social Media Samurai. She is someone whom we especially didn’t want to lose contact with, and apart from the artistry you see on social media she also helps in making all major decisions regarding the green house. Because Vladi is a cheerful and all-doing Shiva, with a huge heart that loves being surrounded by positive beings - including dogs, kids and flowers, filling her mind with quality music, books, movies, events and trips, and using her unshakable energy to create beauty and harmony. In short, Vladi is family. Therefore, we will always be together. 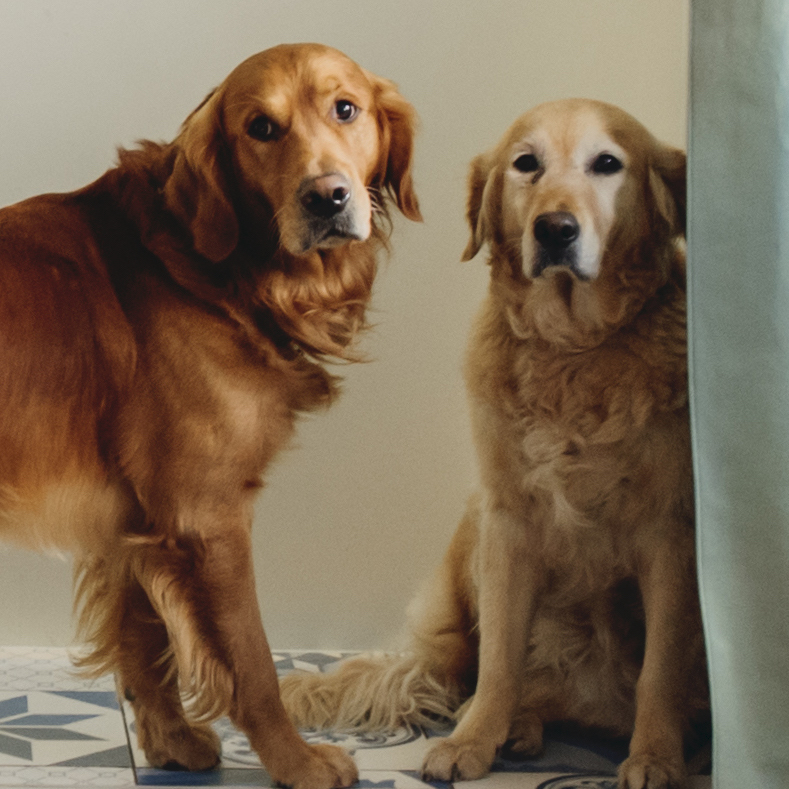 Shaggy yellow dogs named Roya and Indie. More than humans, they are the heart of SOHO. Responsible for welcoming the new guests and old inhabitants and tapping with their nails across the floorboards, they'll push their wet noses onto your lap and even if you are in your worst possible mood, they'll manage to fix that in seconds! They love to be loved and to love a lot. They’ re always begging for food, but please do not give them any, because Luba will scold you!